Last Winter Ingrid and I went to a lecture on Bluebird Boxes and I was enamored.  Somehow I convinced myself that our heavily wooded 3 acres on a salt-water river might attract Bluebirds (it cannot).   But Ingrid loves me dearly and will indulge me on occasion  . . . so she bought me a beautiful Audubon Bluebird Box. 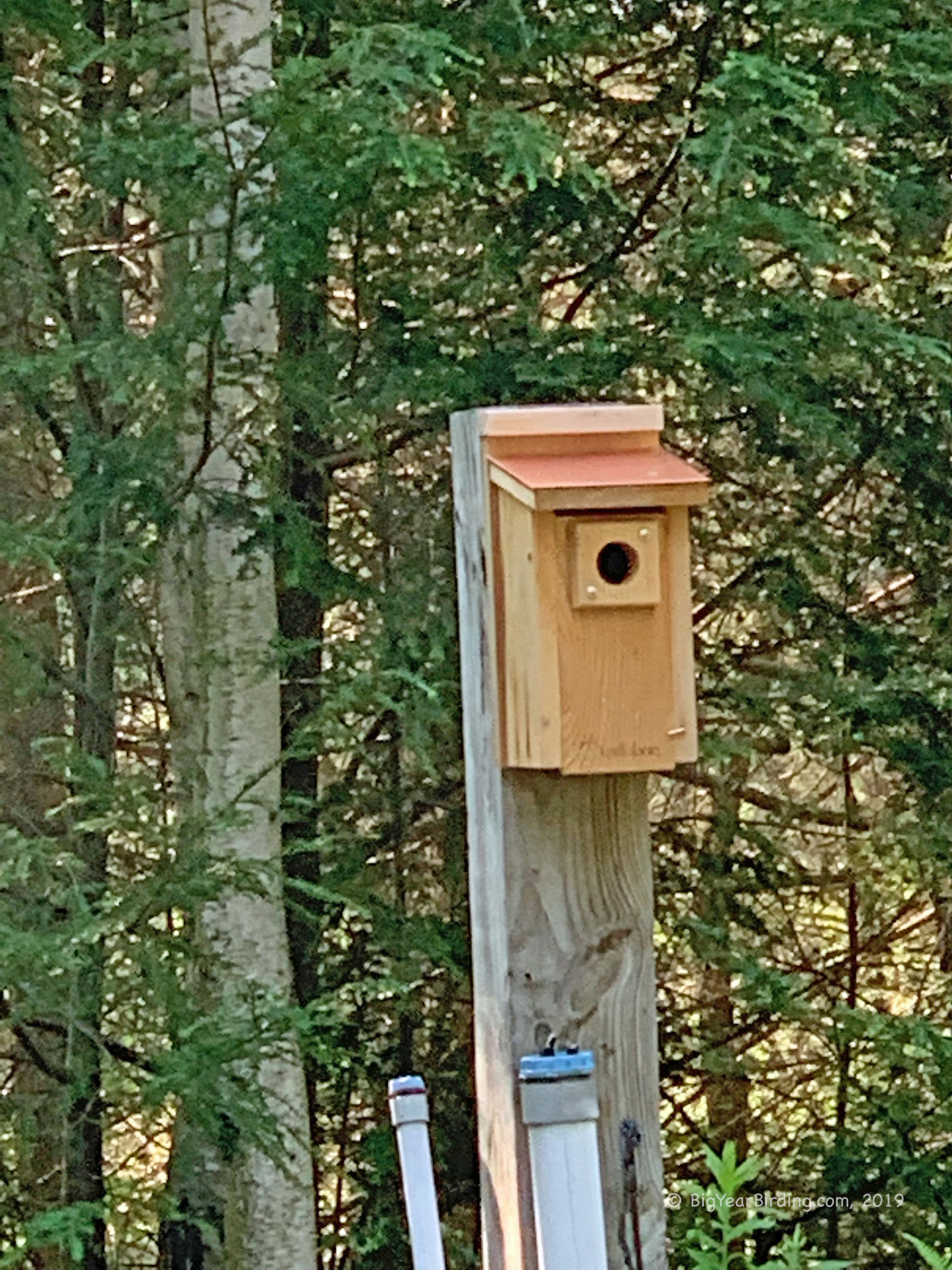 As I implied earlier . . . we have virtually no open Bluebird appropriate land . . . but after a few failed attempts I finally nailed the Box to an old Well Post that fronts onto 50 yards of lawn and driveway.

And for a couple months it sat empty. I checked it every few days as was instructed at the Bluebird lecture (to prevent House Sparrow appropriation). I really wasn’t expecting to see anything . . . but hope springs eternal.

Then on June 4th, I opened the door and almost had a heart attack as the box was half filled with moss. Clearly not a Bluebird, but after a little investigation . . . an almost equally exciting . . . Black-capped Chickadee nest.

Six days later (June 10) the female Chickadee dug a small cup in the top of the moss and laid 6 white spotted eggs.  She would sit on the eggs for the next 12 days with the male returning often to feed her.

On June 22 it appeared that four, maybe five eggs hatched.  The young were pink and appeared to be anything but birds.  Our visit was quick, less than 30 seconds as we didn’t want to disturb the new family too much.

A couple days later when we checked on the babies, we determined that there were three “blobs” in the nest and one unhatched egg . . . so at this stage of the process . . . only half of the eggs had made it to day two.

On the 26th we were starting to see some feathers or at least the color of feathers.

We were away for 5 days and when we next checked on the babies . . . what a change!!!  Black and white feathers, the pink was going away.  Sadly another chick had died.  Lets hope that’s the last one.

At this point Mom and Dad were spending alot of time flying in and out of the box feeding the lilluns.

When we checked on the kids on July 3, I only saw one bird. I stuck to my 30 second rule and closed the box immediately . . . but would worry for the next 2 days.

Phew, they were both on the nest on July 5 . . . so clearly a couple days before one of the siblings was sitting on the other. Looks like they are getting ready to fledge.

July 10 . . . Watched what think was one of the Fledglings making his first flight from the end of the driveway using my Telephoto lens.

This evening Ingrid and I checked the box . . . and the babies are gone. So Proud!!!!