Saddleback is an enormous and beautiful resort, with spectacular views and après-ski support. Unfortunately, it has had a checkered financial past, closing for years at a time . . . the most current shutdown beginning in 2015. Its biggest handicap can be summarized succinctly: “it is an hour further north from Boston than Sugarloaf and Sunday River”. There is a new group looking to re-open the mountain . . . I hope they succeed.

While Saddleback lies fallow; the chairlifts rusting; and nature reclaiming the trails – it remains one of the few places in Maine that one can observe the birds that live in the sprawling Boreal Forests of Canada (i.e. spruce trees).

As we neared the end of the two-and-a-half-hour drive to the mountain, turning onto the first access road, climbing upward, we were thrilled to get a lifer. The Canada Jay has been our White Whale . . . a bird we just can’t seem to get. We’ve spent countless hours looking for this gregarious bird, always coming up empty. Meanwhile non-birder friends (skiers, hikers) including our daughter Marita and her boyfriend have seen them.

Anyway, a Canada Jay flew right in front of our car and landed in a tree where I could see him from the idling car window. Ingrid was blocked by my fat head and was probably quite frustrated. After about a minute . . . before we could get parked and unpack the camera . . . he was gone. And just like the Road Runner we saw at the beginning of our Arizona trip, we never saw him, or his brothers and sister again. Sigh.

As we were unloading the car at the condo, we heard Swainson’s Thrushes calling from the tree line going up the mountain. This time I got out the camera in time to get one calling.

Our Condo sat at 2,000 up the mountain, within the elevation band of the Swainson’s Thrush. Below 1,000 feet is the domain of the Hermit and Wood Thrushes. Above 2,800 one hopes to find the elusive Bicknell’s Thrush.

On Saturday morning, we were up early for several short hikes and climbs. I’m still recovering from two knee replacements in the last 15 months . . . the last one just five months ago . . . so I was still unsure if I was going to be able to climb a mountain as steep as Saddleback.

We were surprised at the number of warblers on a mountain. The leaves were just breaking out of their buds, and there was still snow in spots . . . not a lot of warbler food. But we saw a wide variety of warbler species over the weekend.

It poured all Saturday night and Sunday morning and we began our climb (on one of the long gradual side trails about 9:00). The trails weren’t as wet as we feared but there were times when we were crossing wide streams and sinking ankle deep into bogs that we questioned our sanity.

About an hour out we started hearing a Bicknell Thrush calling . . . at the same place we had turned around the previous day after watching three thrushes fly by. I played a Bicknell Thrush song on my phone, a bird answered, and then a Thrush flew by us into the woods. We decided to count this as a FOY sighting. Our third target Boreal Bird of the weekend (sadly it would be our last).

Thirty minutes later we started hearing an incredibly loud happy excited musical series of trills. We kept climbing and climbing and the singing continued and continued but we couldn’t find the bird or figure out what it was.

Finally, at the top of a tall spruce at the edge of a particularly steep section of the trail . . . a Winter Wren was singing away. We probably heard another dozen Winter Wrens before the weekend was over. They must love this habitat.

As the trees started to shrink in size as we approached the tree line we started to hear chickadees and we hoped that we were hearing Boreal Chickadees (this is where they live) but incredibly . . . it was the same Black-capped Chickadee that we see at home. Damn.

Our trail finally met the main chairlift trail a short climb from the summit but we decided to head down instead of up. My knees were handling going up quite well but I was concerned about how they would act on a steep descent.

We saw few birds as were worked our way down the main chairlift slope . . . of course I was shaking so bad from fear . . . an Ivory Billed Woodpecker may have landed next to me and I wouldn’t have noticed it. 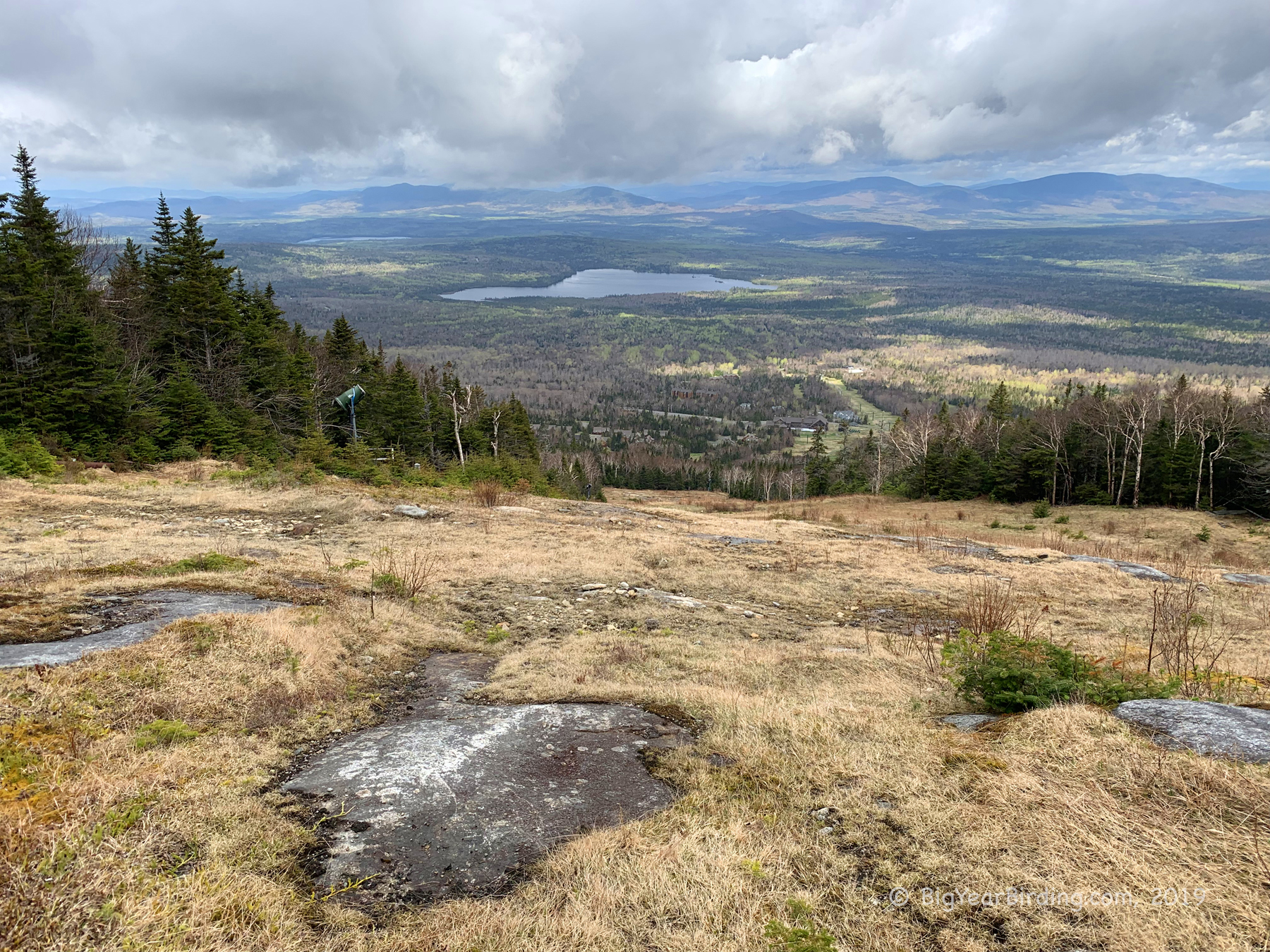 We took a few more short birding excursions later Sunday and Monday morning before heading home . . . but nothing of note . . . and the Canada Jay continued to mock us (after the initial tease).

On the way home, we picked up a Black Tern . . . a bird that we had no idea nested in Maine. A Pied-billed Grebe bobbed up and down as we scanned for the terns