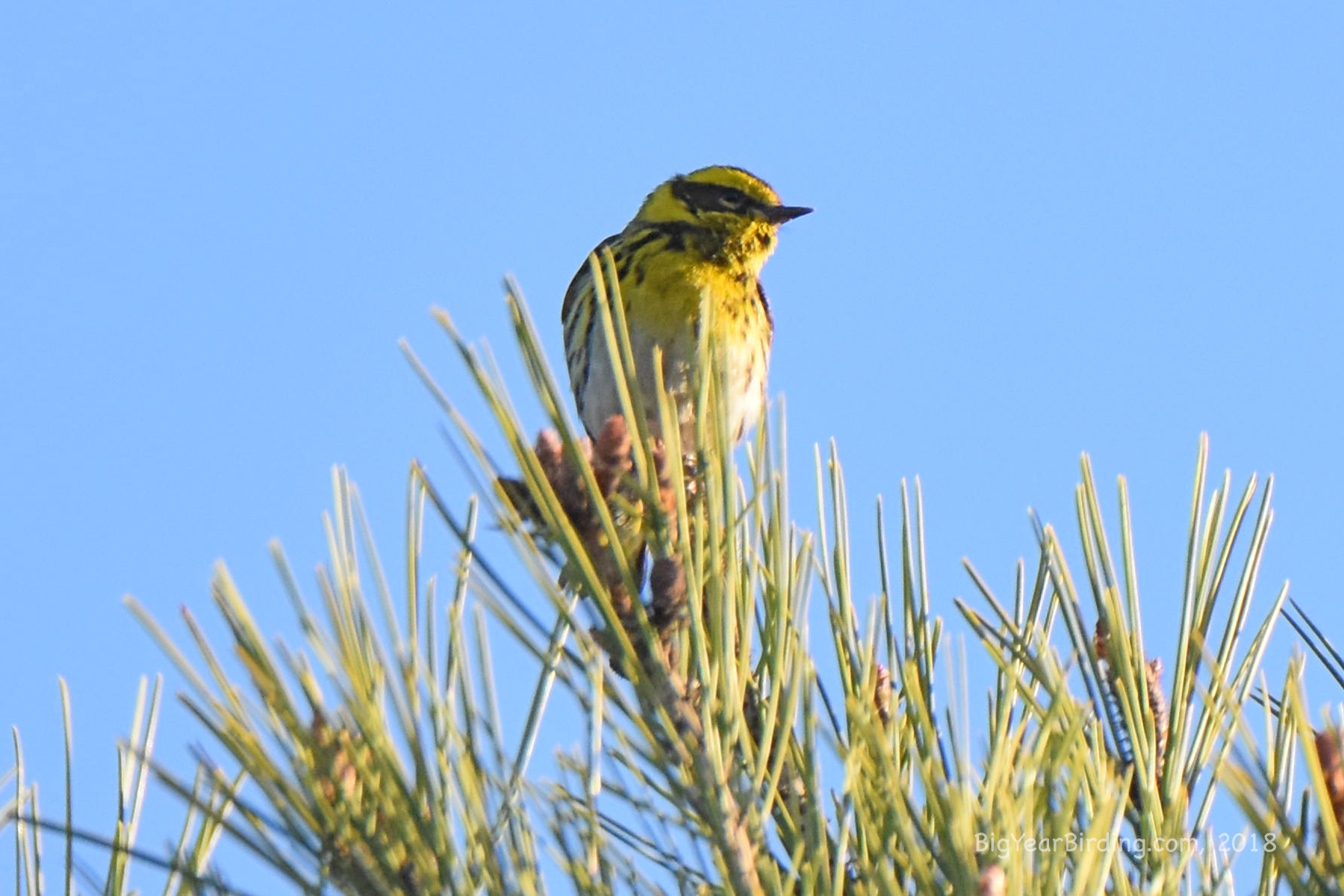 After packing up the car to begin our journey home this evening, we were excited to get our San Diego Big Day – eleven straight hours of birding – underway.

It was a chilly morning once again, but thankfully the temperature quickly rose to 61 degrees by 11:00 AM, and the fierce winds of the previous day had vanished. By lunch time we had recorded 76 species – two more than all of yesterday!

We began our day at Nestor Neighborhood Park, a prime spot for early warblers. Here we documented yellow-rumped, common yellowthroat, orange crowned, and the star of the show – a gorgeous male Townsend warbler! Other species included western and summer tanagers and a stunning view of a red shouldered hawk, among others.

Stop two brought us to the Tijuana Slough National Wildlife Refuge Shoreline. Here we found bufflehead, kingfisher, lesser scaup, multiple species of scoters and grebes, Brandt’s cormorant, royal tern, sparrows of all kinds…so many birds! Having seen nothing at stop 3, the Tijuana National Estuarine Reserve yesterday, we were toady delighted to find many avian visitors. A few highlights: marsh wren, Coopers hawk, and hermit thrush. We also found the yellow-crowned night heron we saw yesterday at the apartment complex just a short walk away.
The final stop before lunch was another return welcomed from yesterday, Chula Vista State park. While the cackling goose was absent, many other birds delighted us with views. Among them: Many heron, a reddish egret, plovers, long-billed curlew, Caspian and Forster’s terns and blue-winged teal. After a ‘working lunch’ of 20 minutes travel north, we arrived at Lake Murray, where opening day for the local Little League baseball and softball teams was underway, complete with music and alluring aromas produced by food vendors. A fun, festive family atmosphere. As Ethan observed, it’s fun to see how kids everywhere are basically the same – playing, teasing, eating – simply outside enjoying a time-honored ritual of spring.

Below the ball fields is a lake surrounded by a wide biking, running/walking path, The temperature being perfect for a day outdoors, the path was quite busy. Despite all of the human activity, the birds were undisturbed and quite active, especially for mid-day. Stars of this habitat included: California gnatcatcher (a rarity), California towhee, ruddy ducks, redheads, bushtit and a very oddly named scaly-breasted munia. Violet green swallows, Bewick’s wrens, lesser goldfinch and gadwall were among the many birds enjoying the lake and it surrounding trees, reeds and shrubs. By this time our list for the day had grown to a robust 91!

El Monte Park, our next stop, had a decidedly different feel to it with its surround of rock-faced mountains and garden-like setting, home to a variety of bird-attracting trees. Highlights here included a great horned owl (on nest in an oak tree), acorn woodpeckers, lark sparrows, Hutton’s vireos, white-winged doves and a red-tailed hawk treated us to a soaring display as he contentedly hovered above us on a steady draught of wind. Here our list reached 101!

Our final stop was Robb Field which abuts a tidal river. As we drove across the bride entering the area white pelicans and American avocets were plentiful. To top off the day we quickly added a killdeer pair, American pipit, tricolored heron, whimbrel , red-breasted merganser and a great surprise and a first and much sought after bird for us, a black skimmer – yes, they really do skim the surface of the water as they search for food.

As we walked back to the bus, a vesper sparrow appeared in our path, putting the frosting on the cake of this fantastic day of birding and growing our list to its final 110 birds for the day!